If you want to use multiple flash guns you need some way of triggering them all at the same time. Although the dropController has 3 flash trigger ports, they are not designed to trigger separate flashes at the same time but rather separate flashes at different times. Flash guns that you want to trigger simultaneously should all be connected to a single flash trigger port.

By far the easiest way to do this is to use a wireless trigger. I use the Yongnuo system.

If you don’t have a wireless system then wires are called for.

When I first started I only had 2 flash guns and so to connect both of then to the dropController I use a simple head phone splitter/Y connector. This was quick and cheap but had a caveat. Using a headphone splitter connects the flash guns directly together in one circuit. If all your flash guns are the same make and model this is not a problem as they will all have the same trigger voltage. Headphone splitters should not be used when you have different flash guns, especially older models that may have higher trigger voltages.

Flash Trigger V1 iuses the same circuit/connections as the Y connectors. All flashes are connected together. This allows a fairly simply circuit but has the same restriction as using Y connectors and all flash guns should be the same make and model with a relatively low trigger voltage. 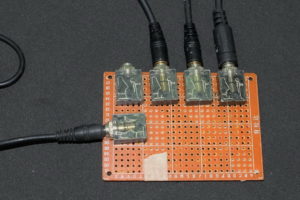 V2 expands V1 and adds optocouplers. This isolates the flash guns from each other adding a little bit of protection. The amount of protection depends on the optocouplers used. I use 4n25s and 4N26s which are on the low side. Fine for modern digital flash guns. Not good for older non-digital flashes. One of my old flashes has a trigger voltage of about 320V. This would like likely kill a 4N25.

Here is the protoype. Because the trigger out on the dropController is unpowered a battery is used to power the optocouplers. The flash have their own power so no need to add a power supply to the flash side of the optocoupler. 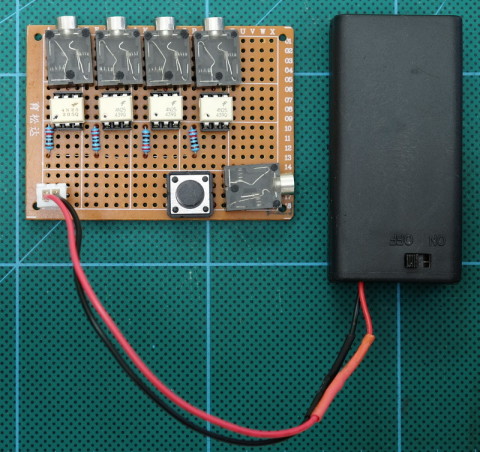 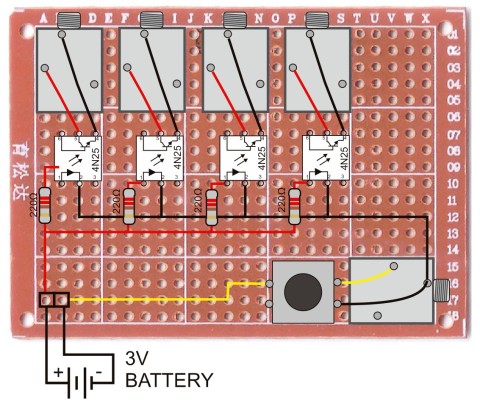 The 4N25 has a forward voltage of about 1.5V and draws about 10mA. The power source is a 3V battery and so this means 150 ohm resistors can be used (if you want to know why, look up Ohms Law). I didn’t have 150ohm resistors so used the 220 ohms ones I did have.