All code and apps are provided free for non-commercial use. You are free to change the code and designs in way you like for your own personal use.

The app was created in app inventor 2 and the aia file is included in the download. Be warned, the app is at the upper limit of what app inventor can do and your browser will be extremely sluggish when editing.

Android app version 2020_008_101 available in beta. The app is only available here at the moment (not yet on the Play Store) and will need to be side loaded on to an Android device. The download is a zip file containing the apk file and the app inventor aia file.

The Windows program does not need to be installed and is run directly from a folder. It requires the .net framework, minimum version 4.0, available at Microsoft .net 4.0 download page and will run on Windows XP SP2 and above.

The Windows app was written in Visual Basic 2013 and maintained in VS2017 and now VS2019 Visual Studio Community IDE.

Visual Studio 2019 Community is free to use for students, open source contributors and small development teams and it is available for download at https://www.visualstudio.com/downloads/. The download is just the installer which will download the main program from the internet.

The sketch requires the digitalIOPerformance library, see below.
dropControllerV2 Arduino Sketch 2019_V2_001. For use on the version 2 device.

See the Updating the Firmware page for details on how to upload a new firmware.

Since version 2 was purely DIY I have presumed people know how to use the Arduino IDE and haven’t posted the HEX file.

The Arduino sketches requires the digitalIOPerformance library. This is actually outdated but still works with all 328 based Arduinos like the Nano. I have tried in Arduino IDE 1.6.3 and 1.8.5 and the sketch compiles fine. The library does not work with newer non 328P based Arduinos such as the Arduino Micro & Leonardo which are based on the ATmega32U4 chip.

Arduinos are fairly slow at switching pins on an off and digitalIOPerformance speeds things up by cutting out a lot of unnecessary functions the Arduino normal performs. It only works on older Arduinos though. On Arduinos that it does not support the code defaults to the regular Arduino way. In practice I am not sure this makes a difference when using solenoid valves.

If you are not familiar with the Arduino IDE or you simply do not want to install it you can use the HEX file to update the dropController. The HEX file is a pre-compiled firmware that is ready to upload.

The Download includes everything you need to upload the new firmware. The Arduino IDE is not required.

See the Updating the Firmware page for details on how to upload a new firmware.

Due to the pandemic, international shipping remains disrupted and I have decided to delay implementing a full online shop until the situation gets better. Shipping times and service availability are not consistant and things seem to change daily. If you are interested in purchasing any equipment please email me (see the price list) and I can give up-to-date information. dropController price list. 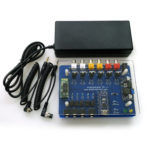 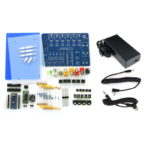 Shoot From Below Guide