The 8 valve version allows up to 24 drops. Any valve can be used with any drop.
When the SEND button is clicked, the drop data is sent to the dropController device and the drop sequence is started. While the sequence is active the controls in the web app are inactive (same as previous versions). 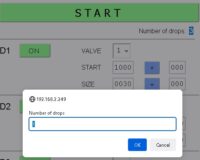 I have made a couple of hardware changes to the latest design.

I decided to keep the SEL button so I moved it to the front next to the SET button. I think this looks and works better and means the hole in the top panel is not required. The SEL button is now used for Manual Drain.

In a very early version of the dropController I had hardware buttons to open the valves. I removed these when I started selling the device and I have regretted removing the buttons ever since. Manual Drain adds back the ability to open and close the valves without using the app. This is handy for cleaning and draining.

I have separated the code for the 8 valve and 16 valve versions.